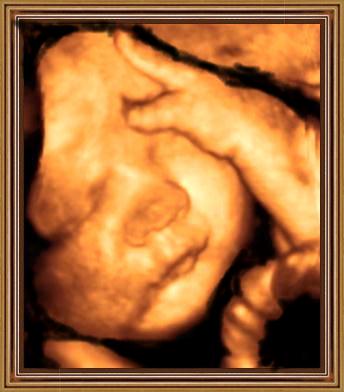 Placenta health in relation to adult health is a subject that has evaded for the most part the obstetrical literature over the last 15 years. Primarily, epidemiologists and physicians other than obstetricians have done most of the work on this subject. Quite a significant amount of literature has been devoted to the elucidation of the relationships between fetal development and adult disease.

The concept of “fetal origin of adult disease” has been very well established not only with epidemiological studies but also experimental studies in both, animals as well as humans. The first time the concept of “fetal origin of adult disease” was suspected, when men in Netherlands who suffered premature cardiovascular deaths, were found to have something in common; they were in their mother’s womb at the time of the Dutch famine which was brought about by the German blockade of the Netherlands in the winter of 1944-45. 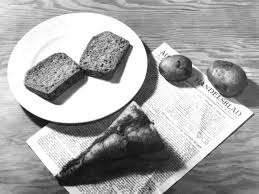 Later on, additional studies from the United Kingdom revealed confirmed that, deprivation of nutrition during intrauterine life and low birth weight is associated with substantial morbidity from cardiovascular diseases as well as mortality in both men and women. A baby born at close to 9 lbs. and 6 oz. (4 Kilos) has the lowest probability to die prematurely from a fatal heart attack or stroke. In contrast, babies born at less than 5 lbs. 8 oz (2.5 Kilos) are almost twice more likely to experience such fatal heart attack. For women, there is a similar association but less severe than in men. Most likely this is due to the beneficial effect of estrogen. However, after menopause, the beneficial effect of estrogen disappears and women’s cardiovascular risk surpasses that of men’s.

Maternal weight at birth is a strong determinant of neonatal birth weight. When maternal birth weight is less than 5.5 lbs. or 2.5 kg, there is a significant risk that her offspring will be small for gestation and even suffer significant growth restriction. This means that the babies of women born small for gestation, do not realize the nutritional advantage of their expected genetic potential and of course, this leads to bad health consequences later on. In contrast, the father’s birth weight does not really influence the birth weight of the offspring.

Pregnancy is a wonderful, natural phenomenon. It transforms the female body to a life generator. For this to be achieved, the maternal body must undergo certain changes in order to support the development of the fetus from a tiny, single cell organism to a complete human being. This includes, gastrointestinal, renal and cardiovascular changes but not only.

Several studies in animals and humans have shown that periconceptional (time before pregnancy as well as during pregnancy) maternal nutritional state plays a very important role in the subsequent development of the fetus. Nutritional imbalances prior to conception exert a significant effect on the quality of placental development and subsequent fetal growth. Balanced nutrition prior to conception in contrast leads to a healthy and well-grown neonate.

Nutritional deprivation during pregnancy affects fetal growth differently at different stages of development. Nutritional insufficiency prior to conception and during the first trimester, limits fetal growth and the neonate will be proportionately small giving the appearance of a normal small neonate. In contrast, third trimester nutritional deficiency leads to neonates with significant weight/length disproportions. The newborn is likely to be skinny and long suggestive of a genetic potential that was not fulfilled due to the insufficient nutritional supplies at a critical time that the baby was determined to grow faster according to its own growth trajectory.

It is evident then, that early nutritional deprivation changes the baby’s growth trajectory; the new trajectory expects the baby to grow smaller. The baby by means of metabolic alterations and developmental programming reduces its nutritional demands in order to survive and grow according to the new growth pattern. When fetuses are deprived, they have the capacity to change the function of their genes in order to reduce their metabolic needs. This is achieved by the so-called epigenetic imprinting, a methylation de-methylation process that changes the normal functionality of a gene. By doing so, fetuses decrease their metabolic needs and thus become able to survive a a hostile environment with limited supplies. 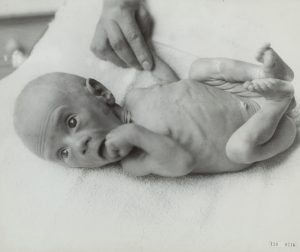 A fetus deprived early has all the time to adapt, reduce energy demands and survive to be born alive. In contrast, a fetus deprived in the last 12-14 weeks of pregnancy does not have the time to adapt and is more likely to die before birth. This is quite apparent on the demographics of fetal demise. Most stillbirths happen to fetuses that are at the low normal birth weight centiles for gestational age (between 10 and 25%) as opposed to babies who are below the 5th% and 10th%.

Proportionately small babies are at increased risk of high blood pressure in adulthood but do not have an increased risk of coronary heart disease. As adults, individuals who were disproportionately short at birth tend to have abnormalities of systems controlled by the liver, and have increased rates of coronary heart disease. These effects may be the result of adverse effects on liver development associated with central blood flow redistribution later in gestation (brain sparing phenomenon).

When oxygen and energy supplies are inadequate due to placental insufficiency, the cardiovascular system distributes most of the available oxygen and nutrients to the brain, the heart and the adrenals (the glands that produce the stress hormones); the rest of the body suffers receives reduced oxygen and nutrient supplies. Neonates with a low birth weight in relation to their length (skinny babies) are thought to be at increased risk to develop insulin resistance and coronary heart disease in adulthood as a result of fetal under-nutrition in the weeks leading up to delivery (after 28 weeks gestation).

Consistent with this, a recent follow-up study of men and women whose mothers were exposed to famine in pregnancy showed that third-trimester famine exposure resulted in impaired glucose tolerance (insulin resistance) in the offspring in later adult life. As might be expected, the predominant type of fetal growth restriction varies greatly in different populations. These variations may contribute to geographic differences in the prevalence of coronary heart disease.

Studies of the famine of 1944–1945 in the Netherlands led to the rigid concept that thinness at birth results from influences operating in the last trimester of pregnancy. Outside the setting of famine, both animal and human studies indicate that fetal under-nutrition late in pregnancy is, however, more commonly a consequence of a maternal-placental supply deficit that has its origins earlier in gestation. This is usually the result of early developmental damage to the structure, size and function of the placenta without the presence of maternal malnutrition. Such placental deficiencies are easy to be missed prior to 28 weeks because of a unique relation between the time and rate of growth of the placenta and the time and rate of the fetus. 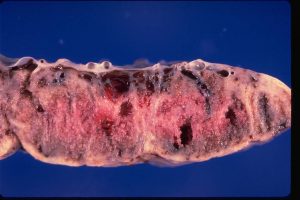 The placenta develops and reaches almost full capacity in terms of maternal supply by 24-26 weeks. Fetal nutritional demands at the same time are minimal; fetuses barely achieve one third of their full-term. Because of this advanced placental development, and the limited demands of fetuses prior to 26 weeks, it is common for fetuses to present with appropriate weight for gestation. However, it becomes a totally different story beyond 26 weeks. Fetuses triple their weight in the last 12-14 weeks. This is a tremendous demand of the placenta and any deficiency that took place earlier in pregnancy will be limit the placenta’s capacity to supply the increasing demands of the fetus. This leads to a supply demand mismatch and in turn, to a growth deficient newborn. Such kind of placental deficiency is the result of coagulation imbalances, immune system deregulation, anti-phospholipid antibody syndrome among others; such insults start affecting placental development as early as the embryo initiates the implantation process.

Placenta: “the most neglected human organ”

It is only recently that the NIH convened a scientific meeting to initiate the Human Placental Project. 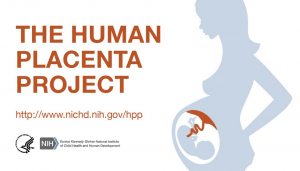 At that meeting the human placenta was identified as the “Rodney Dangerfield” of human organs, because it’s got no respect. However, it has been apparent to us over the last 25 years from our placental research that most of the fetal nutritional problems are not the result of maternal nutritional deficiencies but are due to deficient placental development. It is therefore of paramount importance to pay close attention to placental development from the earliest stages in pregnancy when we can still act proactively and help the placenta return to normal developmental path. Yes, contrary to what most obstetricians believe, the placenta possesses amazing plasticity and can recover most of the capacity necessary to supply the unborn with all expected nutrition and oxygen.

Knowing that the quality of fetal development is one of the most crucial factors in determining health and quality of life in adulthood, it is our moral and professional obligation to do everything in our power to provide the most optimal intrauterine life experience for each and every one of the unborn, from the earliest stages of placental and fetal development.